The content on this page was commissioned by our sponsor, EY.

Improved productivity and cost savings were important priorities for Mondelez International, Inc. when it looked for ways that technology could fine-tune operations. But as the global snack foods company has found, automation can lead to more than better margins. When coupled with intelligence, automation can also support transformation and unleash growth.

Mondelez International began its intelligent automation journey with robotic process automation (RPA), which uses software programs called bots to automate rote tasks previously done by humans. This can speed processes to improve customer experience, and enable deployment of employees to higher-value work. RPA can also lay the foundation upon which more sophisticated AI is built, which is why corporations are embracing it as part of their digital transformation strategies. 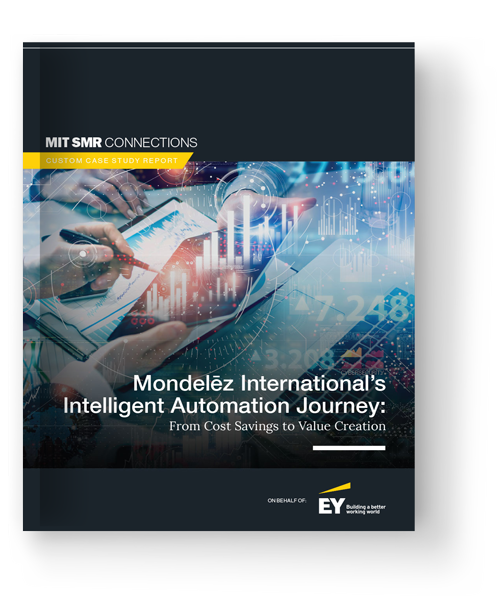 At first, the RPA project was pretty tactical, Reto Sahli, Mondelez International’s global intelligent automation program lead told MIT SMR Connections. But as the company built out its Center of Excellence and developed the methodologies, concepts, tools, and governance for the project, “we started realizing this could be way, way bigger,” Sahli said. “Very quickly, we saw growth opportunities where we could leverage robots and cognitive capabilities to increase revenues.”

The case study report details an important success factor: how project leaders, including Sahli and Caroline Basyn, senior vice president of Mondelez International Information Business Services, kicked off with brainstorming meetings with managers from around the world. These meetings surfaced opportunities to leverage automation in a range of different functions.

In one of those brainstorming sessions, the company’s Customer Engagement group in Wilkes-Barre, Pennsylvania, emerged as a candidate that was eager for process automation. In the report, that group’s key players in the subsequent RPA implementation share the lessons they learned and the results achieved.

Read the full case study report to learn how Mondelez International has gained efficiency and driven new revenue by implementing RPA, and how that technology feeds into its larger strategy to leverage AI for growth.