It’s hard for any organization to sustain success indefinitely. To stay relevant, organizations must periodically reinvent themselves. The introduction of cloud computing set off a generation of reinvention. Now the next wave of reinvention is clearly being driven by data. Leaders need to be able to rely on solid, meaningful data to make decisions now and prepare for what’s ahead.

Doing that requires building a data-driven organization. Essentially, such organizations treat data like an organizational asset, no longer the property of individual departments. They set up systems to collect, store, organize, and process valuable data and make it available in secure ways to the people and applications that need it. Then — and here’s the key — they use that data to inform those all-important business decisions. 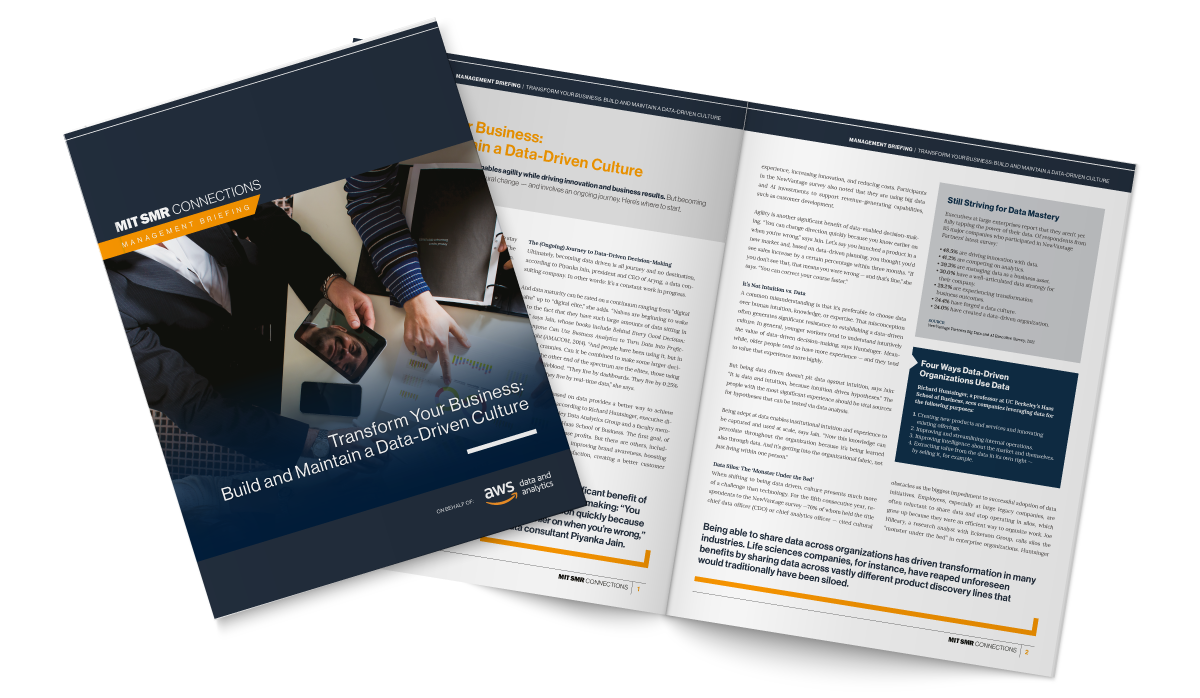 Download “Transform Your Business: Build and Maintain a Data-Driven Culture”

But it’s not always easy to shift to (and then maintain) data-driven decision-making, especially at large companies that grew and thrived with data siloed by function or department. In this year’s NewVantage Partners survey of executives from Fortune 1000 and industry-leading companies, fewer than half said they are driving innovation with data, and less than one-quarter said their organization is driven by data. Both findings represent decreases from levels reported in 2019 and 2020.

“Leading companies are struggling to become data driven,” says Randy Bean, CEO of NewVantage Partners. Part of the decline is due to the evolution of a more realistic view of what it means to be data driven. Also, data volumes continue to proliferate along with new sources of data. “More and more information keeps hitting them. As quickly as they get good enough to handle one particular thing, five new things come at them,” says Bean, also the author of Fail Fast, Learn Faster: Lessons in Data-Driven Leadership in an Age of Disruption, Big Data, and AI (Wiley, 2021).

Ultimately, becoming data driven is all journey and no destination, according to Piyanka Jain, president and CEO of Aryng, a data consulting company. In other words: It’s a constant work in progress.

And data maturity can be rated on a continuum ranging from “digital naïve” up to “data leader,” she adds. “Naïves are beginning to wake up to the fact that they have such large amounts of data sitting in silos,” says Jain, whose books include Behind Every Good Decision: How Anyone Can Use Business Analytics to Turn Data Into Profitable Insight (AMACOM, 2014). “And people have been using it, but in nooks and crannies. Can it be combined to make some larger decisions?” On the other end of the spectrum are companies that are data leaders, those using data as their lifeblood. “They live by dashboards. They live by 0.25% optimization. They live by real-time data,” she says.

Download “Transform Your Business: Build and Maintain a Data-Driven Culture”